I have been walking around with a lump in my stomach. My father-in-law, my husband’s father, Ali Radwan Hassan has passed away two weeks ago. At age 82, in the town of Mash-had located outside of Nazareth in Israel. There were health problems, so I can’t say that this event was a complete shock. However, losing a family member is always difficult.

I feel grateful that I had the privilege to meet him and know him. Ali Hassan had to face the blunt force of western colonization of the east in a first hand direct manner and had to do it, uneducated and poor. Despite unimaginable injustice committed against him, he raised 9 children emphasizing the value of education, compassion, community and hope. There is much laughter and joy in my catalogue of memories involving him. The fragments of despair drowned out with a flood of happy moments.

I will always remember his unlimited kindness that extended to all living things. He would collect food leftovers to feed a myriad of stray cats in the neighborhood, until his house became a gathering place for cats much to the chagrin of my sister-in-law. I remember his complaining to me one time how a certain farmer was too forceful when picking olives from olive trees. He explained to me that trees need gentleness and need to be treated with respect. You would think that he was a tree hugging hippie from California, not the conservative Muslim Palestinian man that he was. His generous spirit extended to all people.

It would have been natural for him to feel bitter and angry at the world for the unfair hand he was dealt. But instead he was hopeful. In his company I always felt that “things will work out towards the best”. I will always remember one afternoon, my husband and I were driving him around to grocery stores to sell boxes of freshly harvested tomatoes. He would strike a deal with the store owner and then My husband and I would carry the agreed upon boxes of tomatoes into the store. While we were busy doing our job, he would playfully tell the store owner: “Do you see that man carrying tomatoes? That is a university professor.” The store owner would laugh: “Yeah! Right!” They would both laugh as they discussed the probability of a university professor moonlighting as a labourer. He repeated the same playful joke with each stop we made. I could tell in the twinkle in his eyes that he was feeling proud. What he really wanted to say: “That awesome cool young man ….. that is my son.”

Towards the last years of his life, he began to slow down. The front porch became his favorite hangout He became a bit of a monument in the town of Mash-had. Kids going to school would yell greetings in his direction and he would greet them back encouraging them to go to school. People driving by would wave at him and he would wave back. Anybody was welcome to take a seat and have a chat. He became such a constant that if you look thorough google earth in the town of Mash-had you will find his picture on the porch. 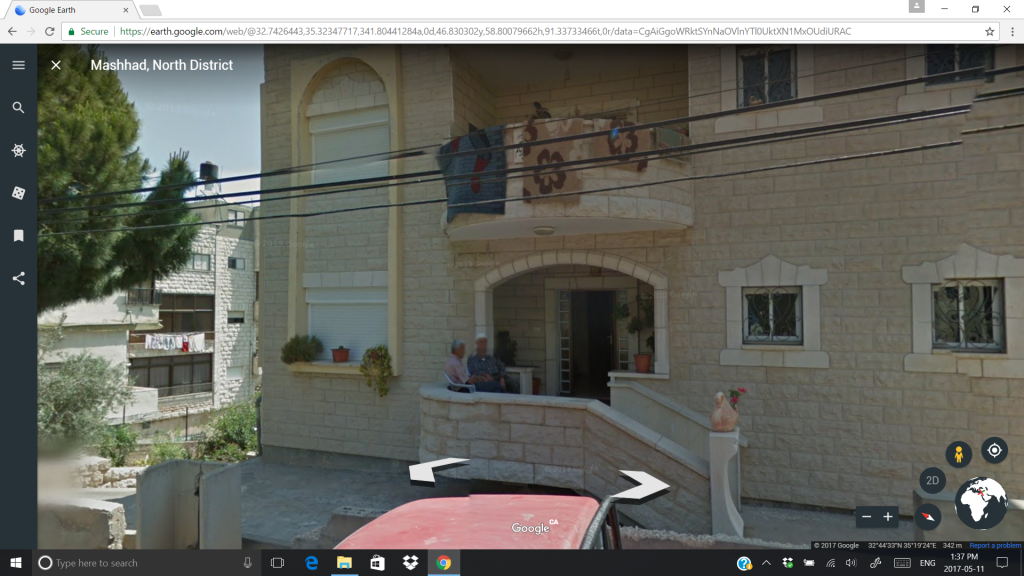 8 thoughts on “Losing My Father In Law”