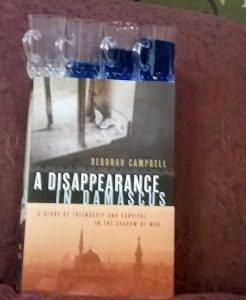 A story of friendship between two women. One Canadian, the other Iraqi. Both must find strength to deal with gigantic difficulties. This is the story of A Disappearance in Damascus.
What I appreciated most about the book is the detailed portrayal of life of an Iraqi refugee in Syria around 2007. You get to meet a myriad of characters and each one is interesting enough to have a whole book written about them. Each one is described with just enough detail that you can imagine them living and breathing without slowing down the building momentum of the story. I contacted Deborah Campbell, the author of the book, and asked her if she would conduct an interview for this blog. Graciously, she agreed.

Throughout the book we meet a myriad of characters who have endured and witnessed shocking acts of violence. What, if anything, in your experience helps people heal or move forward from those experiences?

About ninety percent of Iraqis had a friend or family member killed or maimed. I met people who suffered the kind of symptoms documented in soldiers from the First World War who survived the trenches. One girl was struck blind after witnessing her cousin murdered, for example. She had no physical symptoms, her brain just wouldn’t let her see anymore.

One response to violence is more violence. The rise of ISIS is one way communities respond to devastating trauma. Their leaders met in an American prison in Iraq called Camp Bucca, where they had nothing to do all day but plot revenge under the oblivious eyes of their American jailors. Another response is to turn to religion. (ISIS, you could say, combines both.) Other people, like my fixer Ahlam, dealt with their pain by helping people. She had particular compassion for displaced girls because she’d been the first girl in her village to go to high school, and the first, male or female, to graduate university. She felt like the next generation was slipping into darkness, and she wanted to do something about it. I was really impressed by her.

In your book, Syrians frequently express concern that Iraqi refugees will bring their war with them. To what extent do people in Syria today blame the civil war on Iraqi refugees that had been allowed into the country after the second American led war on Iraq?

I don’t think Syrians blame Iraqis at all. They blame the people killing them today, whether Syrian government forces or the hundreds of Islamic opposition militias being armed and funded by the outside world.

In its origins, the civil war in Syria stems from a rural-urban divide. (Rather like the American political fault line today.) One of the consequences of the Iraqi refugee exodus, when the majority of Iraqi refugees were fleeing into Syria, was the fact that the simultaneous displacement of Syrian rural farmers due to a historic drought was largely ignored. At the time, Syria was also trying to transform itself into a Western-style, neoliberal country, so it was cutting aid to rural regions just when that assistance was most needed. But it wasn’t cutting its security and intelligence services, which were famously abusive.

These conservative, poor farmers and their families, about a million of them, almost all of whom happened to be Sunni, were moving from their traditional farmland to the slums of Syria’s large cities, particularly Damascus and Aleppo. But the low-wage jobs and cheap housing that they normally would have taken were already occupied by Iraqi refugees, so they were desperate, not to mention shocked by the “decadent” lifestyles of urban Syrians.

If you look at where the early protests broke out, they were in areas where there were many migrant farmers, and in drought-stricken areas. Then, of course, foreign powers jumped on board, arming and funding the opposition. This turned what had been a local conflict into the war we see today. Civil wars of this kind are the hardest to end, since any of the many players can be a spoiler.

But the war in Syria would not be the internationalized proxy war it has become if not for the overthrow of Sunni-dominant leadership in Iraq. This led to the rise of Iran, a Persian Shia country that used to be kept in check by Saddam Hussein and is now allied with the new Shia-dominated Iraqi government. The Gulf countries, such as Saudi Arabia, wanted to teach Iran a lesson by overthrowing Iran’s only Arab state ally, the Assad government in Syria. Then there’s ISIS—ISIS is the offspring of al-Qaeda in Iraq, a Sunni militant group that did not exist in Iraq until after the invasion of 2003.

Has Ahlam read A Disappearance in Damascus? What does she think of it?

Ahlam is thrilled by the book. As a fixer, her goal was to show the world the human face of war, and that’s what this book does. She also likes that it’s written as a fast-paced thriller, rather than newspaper-style journalism.

Turning life into literature is a way of processing events. But it was my friendship with Ahlam that really changed me. She taught me it was possible to respond to inhumanity with humanity. That you can be tough and kind of a badass, but you can still extend empathy to people who try to harm you. You can make an effort to understand beyond your own narrow self-interest. And you can keep your sense of humour about it, even in the darkest days.

Have you started a new writing project? If yes tell us a little about it.

It’s not about war. 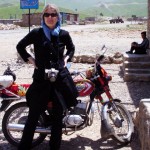 Deborah Campbell is an award-winning writer known for combining culturally immersive fieldwork with literary journalism in places such as Iran, Syria, Lebanon, Jordan, Egypt, Gaza, Qatar, the UAE, Israel, Palestine, Cuba, Mexico and Russia. Her work has appeared in Harper’s, the Economist, Foreign Policy, the Guardian, New Scientist, Ms., The Walrus and other publications. Her writing has been published in 11 countries and 6 languages.