Inspired by Matisse flight of Icarus, I decided to make my own creation. What came out was a delicious surprise. Watch this video and then read the rest of the blog post.

In his old age, Matisse was afflicted with health problems which prevented him from painting. He dropped the brush and picked up the scissors. Producing a set of paper cutouts. Cheerful, vibrant and nuanced they don’t betray a single shard of defeat. Even when portraying Icarus’ crash to the ground after loosing his wings. He is momentarily suspended in the air, experiencing a victory of a different kind.

I am trying to imagine what was going on in Matisse’s heart when he made these.

This is non-heroic courage. The kind that is silent. Impacts though still presence. Blink and you will miss it. 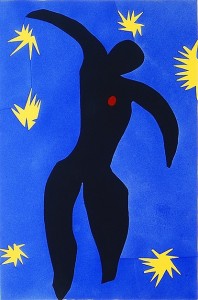 Is this a case of “edibility improved the art”? I shudder at the thought. I shall imagine Matisse eating my gooey crisp quesadilla doing a little dance in heaven.

O failure! you are a cheesy gooey crisp teacher. I am reluctantly grateful for your lessons. 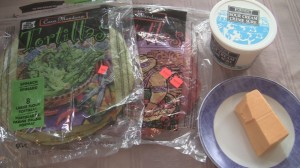 I cut out all the necessary shapes from a printout.
Then I cutout the shape of Icarus in two stacked red tortillas. I tried to use the scissors first. That did’t work well and so I switched to an xacto knife which worked much better.
I placed the paper stars on top of two stacked green tortillas and cut out the necessary shapes.
Grated the cheese.

Place a pan on medium heat. place one tortilla cutout in the pan.
Spread the cheese on top.
Place the matching tortilla on top.
When cheese starts melting, flip on the other side.
Repeat with all the shapes.

Serve on a plate.
Dip a tooth pick in sour cream and draw a dot for Icarus’s heart. 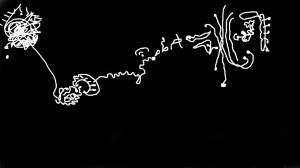 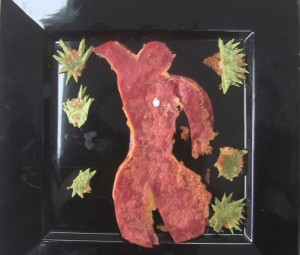 If you enjoyed this Matisse flight of Icarus recipe then you might enjoy The Dance in lobster and spinach.

This is one of many recipes I created to inspire me while writing a novel with recipes.