It has been a life long quest. How to create a sense of belonging for myself? I come up with a pull apart bread recipe to help find answers. Watch the video first, then read the rest of the blog post.

I am baffled by people who use a food mixer to make dough. The pleasure of getting your hands dirty kneading, punching and shaping is so great as to rival the pleasure of fresh baked bread smell wafting through the house.

Two ideas converged in my head:

My guess is that whomever invented play-dough did so to keep the fun of bread making all to himself while entertaining the kids outside the kitchen. To enhance the fun I decided to color the bread in red, green and black using beets spinach and black sesame. This is better than any childhood play session. A radical new dawn in the ancient life of bread making. It is giving me a million ideas. Bread dough as play-dough – what to create? 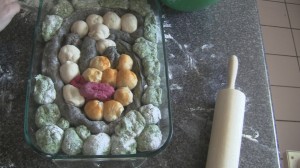 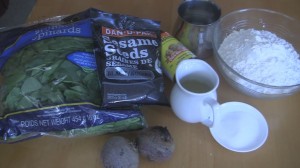 4 bowls. Green, red, black and white :: Spinach, beets, sesame seeds, nothing.
Into each one I added 3/4 cup of water, some oil, a teaspoon of sugar, some salt, table spoon of yeast, enough flour to turn it into dough. Kneed each for several minutes. Covered and let it rise for 1 hour. Punch the dough down and form into balls and other shapes. Stuffed it with fillings. Placed it whimsically on a baking tray. Let is rise again for 1 hour. Baked it on 400 until it started browning along the edges. Enjoy!

How to create a sense of belonging? The Poem

My hyphenated identity comes with three dashes, each one annotated with an asterisk or two. Let me give you a taste. In my kitchen cupboard, the soya sauce resides next to zaatar (a divine herb from Palestine). I have been told that I make the best Russian salad there ever was—this at the same potluck dinner to which I brought my famous hummus. In my stew, the cardamom makes love to pomegranate juice as naturally as it does to mole sauce.

Acrobatically, I have eaten languages, danced to the rhythm of perspective and cultivated attitudes in a rainbow of colors. Yet no matter how earnest my effort, I could never quite satisfy my lust—the desire to belong.  It molests me ceaselessly. When I am here, I want to be there. When I am there, I am missing here. But the delicate aromas of the poetic East don’t mix with the bright glare of the seductive West. This kind of gluttony can only be soothed with a seven-layer dip of beans, guacamole, salsa and who knows what else is in that thing. Perhaps cheese? No. I will replace sour cream with mashed sesame seeds. That orange layer, whatever it is, with diced tofu, roasted bell peppers and add extra virgin olive oil. Mmmmmmm! It tastes good. Even better than …

I must discover the recipe where forever the twain shall meet. It is my quest. One day it will be my gift to the world. MY LEGACY.

How I envy all of you who speak just one language. You intuit a flavor I shall never taste. You eat bread and cheese and innocently say: “It’s bread and cheese.” In Iraq, we called it Iranian bread because it was immigrants wearing tattered thread from Iran who made it. In Israel, the same bread, same taste, is called Iraqi bread because it’s made by Jewish immigrants from Iraq. In Vancouver, the Iranian baker calls the same exact bread, the same smell even, barbari bread because in Iran it was immigrants from Khorsan who brought it. Do you realize how terrifying bread is to me?

Khobos, pan, chleb, lachem, eish, nri, nan, pain. Repetition, in all the languages of the world, soothes me.

One morning after a weary sleep, I woke up declaring to the Universe: “I give up!” Twenty years of this tasteless, useless quest: be good, be authentic, find a place to belong, to have my life mean something. All have led only to spoilage. I accept my lot: rotten. Gillian has vanquished herself in a mustard storm. Zaev taunts my imagination with his razor sharp looks. Healing alludes me.  I can neither satisfy this lust, nor make it go away. Defeat!

The ocean doesn’t care if fish believe in water or disbelieve. All get caressed by currents just the same.

All the landscapes belong to me. The Alps. Euphrates. The heartbeat you skipped. All mine. I don’t need to learn your cuisine. Shhhhhhhhhhh! Listen with a whisper.