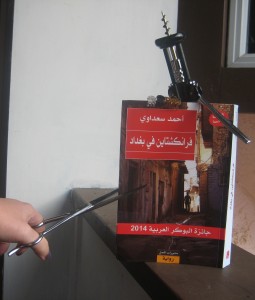 Frankenstein in Baghdad is novel by Iraqi author Ahmad Saadawi. It tells the story of everyday day life of modern Baghdad through a nameless Frankenstein like creature. A seller of old furniture and other used objects, assembles that torn body parts of victims of a terrorist attack into a unified whole. The resulting monster comes to life and roams the street of Baghdad seeking revenge for all the people whose spare limbs have formed his new being.

The novel incorporates many different characters, yet tragically lacks womanly presence. There is one sad old lady that is mourning the death of her son but otherwise women appear on the scene to provide a flesh hole for the men to stick their members in and then magically …… pffffft! ….. they disappear. The flesh hole reference I stole directly from the novel. Ironically it applies to the whole story. The novelist could have visualized a woman journalist, a woman photographer, a woman politician, a woman body part that the nameless monster seeks revenge for, a woman terrorist, a crazy woman American soldier that throws grenades on people. I would have even been happy with a woman who cooks something interesting. The author’s imagination is able to reach the world of dark magical practices, but a flesh and blood woman who has something to say (smart, silly or stupid) escapes his vast enterprise. If you knew nothing about Iraq except what you read in this novel, you would think that Iraqi women folk are either saint like sad old ladies or prostitutes. Nothing in between.

Now that I got the sexism part out of my system …..

The style of writing in Frankenstein In Baghdad is stilted. Frequently the flow is abruptly turned. Plot lines are introduced but then lead nowhere. Characters jump in the scene and nothing happens with them. Many times I felt confused while reading the novel and had to reread whole sections to orient myself. It was only after reading 200 pages did I finally feel like I was getting into the novel a bit. The bad writing creates a labored reading experience that requires effort on the part of the reader. Despite this flaw I though the novel got top marks for creativity. It is not easy to address current state of turmoil that is rocking Iraq. Introducing elements of the fantastical with dark morbid humor took lots of courage. Also, I felt, the novel stayed away from blaming any one party (political or ethnic). All are victims and victimizer in one way or another. This point was executed well. The story gets top marks for describing the hardships of daily life in Baghdad for the average male. That alone gives it value that transcends writing style.

I myself don’t mind bad writing so much. I gives me the feeling that a human being sat down and laboured for months or maybe years to come up with something. With every awkward phrasing you sense the writer grasping for the right words. There is a joy in that, that doesn’t exist in brilliant poetic prose. Where the divine finger of the almighty discharged in a frenzied current, perfection in the form of a novel.

Despite all the flaws, I have to say that I enjoyed reading Frankenstein In Baghdad . I hope it gets translated into English so that a wider public could access it.

One thought on “Frankenstein in Baghdad :: Book Review”