I am Iraqi and I am proud of it. This week I took a traditional Iraqi dish (dolma) and added a few personal touches to it. Turning it to veggie dolma was only the first step.

Watch the video and then read the instructions below.

First off, the rice stuffing is typically made with either ground beef or lamb. Since my daughters have become vegetarians, I had to adapt the recipe to exclude meat and keep the amazing taste. My solution is to add fried onions and garlic into the stuffing and then add vegetarian soup stock into the pot. I am not a vegetarian, but I can honestly say I enjoy this variation as much as I enjoy the meat version.

I added baby peppers instead of their full sized cousins. I was worried that they would loose their stuffing during cooking. My solution was to stand then upright, wedging them in between the larger vegetables for support. Only one pepper fell to the side and turned out empty. All the rest came out looking beautiful. In truth I prefer the baby peppers because the end result was a two bite yummy treat, leaving plenty of room to sample all the other dolma types.

Traditionally, green cabbage is used for this dish. I substituted with red cabbage to add more rainbow visceral goodness into the mix. The end result tasted the same and looked spectacular.

Normally I would add parsley but I didn’t have any in my fridge and so I substituted with mint. The it tasted just as good. 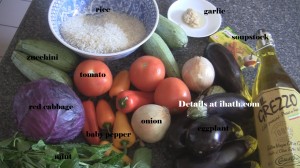 3 cups of rice
1 table spoon of chopped garlic
6 small zucchinis
6 small eggplants
4 onions (one for the rice, 3 for stuffing)
1 small red cabbage
2 bags of baby peppers( each bag seemed to have over 10 peppers in red, yellow and orange)
4 medium tomatoes
1 bunch of mint
olive oil
3 potatoes

To prepare the rice:
I washed the rice with some cold water.
Fried one onion, chopped.
Added the chopped garlic.
Added chopped mint
and then added salt, pepper, cumin, paprika, turmeric and sumac
Added uncooked rice and mixed lightly with a wooden spatula

To prepare the vegetables:
White
Made a single incision down the middle of three onions and then peeled them.
Boiled the onions for 5 minutes
Set then aside to cool for 10 minutes
Using my hands peeled away layers to create oniony wrappers

Yellow and orange:
Cut off the top of the baby peppers and using a knife got rid of any seeds.

Red:
Cut of the top of each tomato
Using a spoon scooped as much tomato out, leaving the outer edge.

Green:
Using my coring knife, I cored out each zucchini. I soaked them in cold water so that they wouldn’t turn brown.

Purple:
Cut out the bottom stem using a knife
Placed the whole cabbage in boiling water
using a knife and my fingers, I separated each leaf.

Black:
Using a coring knife I cored each eggplant. I soaked them in cold water so that they wouldn’t turn color before stuffing.

Finally I sliced three potatoes and lined three pots with them. I do this to avoid burning my dolmas. If you are a more skilled cook than I am, you probably don’t need to do this.

Placed the vegetables in the pots. Placed soup stock, water and salt on each. Brought them all to a boil and reduced to a simmer and cooked for 2 hours.

Initially, my idea was to build a giant rainbow babel tower of stuffed vegetables, but that failed miserably. The vegetables were mushing each other and sliding off each other. Here is a picture of this sad effort. This is the highest I could get it. Feel free to laugh. 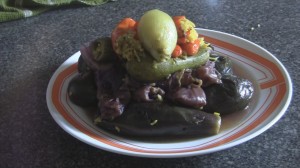 So then I changed plans and simply placed the dolma flat on a serving plate. Much more practical.

This is what it looked like in the end. My epic rainbow veggie dolma in its full glory. 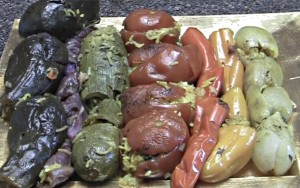 This is only a small portion of what I cooked that day. We ate dolma for three days straight after that. I don’t like leftovers in general, but this was so good I enjoyed it even more the next day and the day after. Plus because of the variety of vegetables each thing tasted different.

I kept all the scrapes that resulted from coring vegetables and made a vegetable soup the next day.

Everybody has a favorite dolma vegetable, mine is the onion. What is your favorite stuffed vegetable?

Now I feel vegetabelized from all the vegetable coring. I need to think of something that has nothing to do with vegetables for next week.