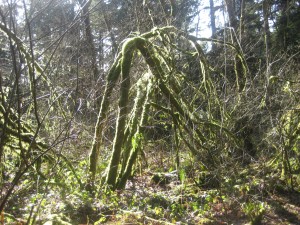 “Write what you know” I heard it said before. Hmmmm! …… I disagree.

At age 19, I immigrated from the middle-east and found myself in an in-between state. Wet from the all immersive experience of being deeply embedded in a culture; dry as a cracker observing new set of social norms. The isolation had a bite. Yet it forced me to forge a personality that is neither of the poetic east nor of the seductive west. In my geometry I imagined a shape that was neither circular nor sharp. I neither complied nor felt compelled to defy conventions. The Quran instructs us to say: “O God, increase me in knowledge.” I repeated the verse as I descended the spiraling stairwell of Sedgewick Library at UBC. My computer science projects bored me. Hours were spend, instead, in the underground library that had two mirrored skylights that brought natural light to the bottom floor. In one frenzied reading session, I discovered that my country of origin, based on Amnesty International rating, had the second worse human rights record in the whole entire world for that particular year. Reading the history of my own, mysterious occurrences suddenly clicked. There are forms of knowledge that cut like barb wire. I understood what I didn`t want to understand. “O God, everything I know is wrong.” I left dreamy university days for a lucrative professional rhythm. My wounds neither healing nor halting me from pursuing the original directive. Consuming with ferocity dusty sources: “I will not be hoodwinked again”. A carefully considered perspective considers all points of view. This process is exhaustive but worth every page turn. There are levels of knowledge and then there are levels of knowledge. An energetic dancer can waltz through this maze. I am a sluggish nerd, prone to contemplating dead ends. “O God, increase me in knowledge” what a heavy burden? Writing stories for computers is easy. Things are logical and supreme laws apply. One day I sat down to write code. A tingling sensation in my fingertips produced typing. The resulting words were not understandable by any machine. Only humans could decipher what I produced. What a shame? I was such a talent. In the kingdom of rational thinking, a poet is a fool. Why can’t inspiration strike to my measure? “What I do know, I don’t know. What I don’t know, at least I know for certain that I don’t know. Provides for a healthier start.” Don’t you agree? I invented a place with its mythical history. Nobody can accuse me that my knowledge of its geography has a hole. In the recesses of my fantasy there is a lone expert. What I don’t know I make up. It is the only antiquity where I know for certain: Who said what to whom? What happens next? And that nagging why? I have all the answers. At least for now. In that country I placed two rivers that run in parallel. One trickles apprehensively with all emotional restrain endured by men. The second flows abundantly with the sexual repression suffered upon women. In between the two, I shall let the battle of the sexes run for eternity. I say: “O God, increase me in knowledge” less frequently, more gingerly. Today Sedgewick library is gone. The skylight that piped natural light into my isolation chamber is a slab of concrete. “God is great.” I heard it said. I am beginning to see.

One thought on “Increase me in Knowledge”