Reading a chapter from my novel Graffiti Hack – a story about the east-west cultural clash told through the viral language of the internet.

A Little more about the novel 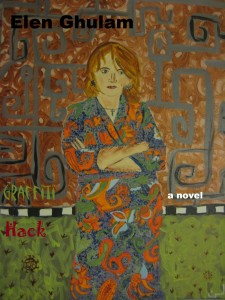 Inspired by her country of origin, Nelly creates a font where each letter is shaped out of a peacock’s feather. When her website design featuring this unique creation is met with ridicule by her coworkers in Washington D.C. Nelly’s anguish takes on a sinister turn. She adopts the alias insekab to cloak her identity and explores the dark world of cyber terrorism. Installing lavish and unique designs on unsuspecting commercial websites, lights the web abuzz with news of insekab’s latest hits.

When not graffiting the internet with her vibrant creations, Nelly is adamant to tell us her story as it unfolds. Her intention is to inspire us to greater heights – a type of a literary reality show. When destiny doesn’t collaborate with her objective, she discovers that hacking into her life’s tale is not as easy as bypassing computer security systems. Can this stubborn storyteller mold fate to her pre-planned account?

Graffiti Hack is a story about story telling – how stories have the power to imprison us and on other occasions to liberate us. The greatest story is always the one that remains untold. Although committed to the truth, Nelly consistently ignores a side of her narrative. Awkward silences and ignored facts linger underneath the surface, leaving enough hints as to be nearly impossible to overlook. As the blind spot grows to a canyon; our heroine resorts to desperate measures to avoid collapsing into the abyss of her anecdote.

Graffiti Hack is a jarring journey into the intersection of art, internet, obsession, immigration, silence, stories and vandalism. Mixing the bite of Generation X by Douglas Coupland with the depth and beauty of My Name is Red by Orhan Pamuk, this novel is complete at 63,000 words.

In addition to English, I speak Arabic, Czech and Hebrew. I worked as a computer programmer for 20 years and earned a B.Sc. in computer science in 1991. In 2006 I self-published a book of creative non-fiction titled
“Don’t Shoot! … I have another story to tell you” of which I managed to sell over 700 copies. I have published short stories in Maclean’s magazine, Adbusters magazine, Geist Magazine, The Tyee magazine, CBC Radio 1 and other publications. The blog I run at www.ihath.com has been featured as a “Pick of the Week” by the U.K. Guardian. The blog receives an average of 20,000 unique hits per month.

Inspired by my early childhood experiences, I am in constant pursuit of weaving a story for the modern age that might bridge the gap between cultures. My goal is to be a storyteller for the Web 2.0 era. I don’t yet fully know what that means, but stay tuned as I experiment and figure it out -always hoping and praying that a fraction of my grandmother’s intuitive intelligence has rubbed off.

5 thoughts on “Most Eloquent of Funny Insults”