Recently I read Rawi Hage’s Carnival, but before I dive into the book allow me to indulge in a little intro. 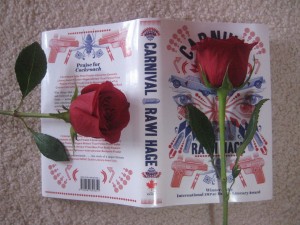 I remember the first time I heard the name of the author Rawi Hage. At a party, my friend Carol was eager to tell me about the Arab-Canadian author who had been nominated for the Giller (Canadian literary prize). My immediate reaction was “Dang! that is such a cool name”. Rawi means storyteller in Arabic and Hage means pilgrim. So essentially Rawi Hage means Story Pilgrim. I can’t think of a cooler name for an author. It evokes an image of a wanderer roaming the lands of earth and fantasy picking and choosing whatever tale catches his fancy to share with his next destination. It is a name you can write a story about. A name that is elevated to the status of heroes with inspiring names. Like Luke Skywalk traversing the universe to destroy the death star. Or Trinity from the Matrix, enigmatic as the effort to grasp the concept of a “Three-In-One Being”. Some names are imbued with destiny inducing meaning and they stick in your head even before the story is told. I wish my parents had the foresight to gift me such a name. Alas I am stuck with my goofy name, but hey it is my name and so …. yeah! …..whatever!

Everybody who read Story Pilgrim’s first book “DeNiro’s Game” told me it was brilliant. Yet being Iraqi, the thought of reading a novel about the heart wrenching topic of civil war seemed too painful. Then a second novel came out. This time the title proved a psychological barrier. It is called “Cockroach” . I grew up in the Middle East and I have memories involving cockroaches that I am trying to suppress. I tried hard to read this one by Rawi Hage, but never got past the first few pages. Eventually both books were placed in the big pile of books in my son’s closet where we started throwing books after all the shelves in our house got filled.

But finally an opportunity to explore the prose behind the namesake arrived. A novel titled “Carnival” came along.

I have a single word of advice for you my dear blog reader: Run – don’t walk to the nearest bookstore and buy a copy of this book. You want to be among the select group of people who have read this book first. Forget about standing in a line overnight to buy the next iPhone. Forget about the next Hobbit movie. This novel is this year’s hot thing and you want to get your hands on it. I read lots and lots and lots of books and it has been a while since I felt this excited about a novel. It honestly is that mind blowing.

I don’t want to reveal the varied plot elements because eliminating the surprise will spoil the reading enjoyment for you. Carnival by Rawi Hage revolves around a taxi driver who calls himself Fly. As a result of his occupation, the craziest and most astonishing characters pop in and out of plot. With each, Fly, the urban warrior, attempts to commit humble acts that smell of super heroism. Sometimes offering a Kleenex box and other times a punch. Fly kept me sitting by the edge of my seat wondering what might happen next. When nightly meanderings in city draw to an end, Fly retires to his apartment where his fantasy life allows his to travel into the past of human history, righting wrongs in the most astonishing yet endearing way. This novel has all the brilliance of the French movie Amelie minus the childish optimism. There are parts that are so dark and ugly they are uglifly beautiful. Other parts are so beautiful that they are fugly. Half way through the Rawi Hage’s Carnival  you will be inventing words to describe it as well because it is indescribable.

Rawi Hage’s Carnival is a story of marginalization. A large group of characters are living on the side-lines yet each dealing with it on his own terms. Throbbing with humanity and compassion the book pulls no punches in depicting the dark side of a big city. Like a spider’s web – delicate intricate yet forceful in capturing its prey.

As soon as I finished reading Carnival by Rawi Hage, I dug through my pile of lost books and managed to fish out DeNiro’s Game and soon I will be diving in there again looking for Cockroach. Some books are simply too good. My phobias and psychological barriers will have to step aside.

Whomever gave Rawi Hage his name was a fortuneteller, not the kind that Fly despises, but rather the kind he doesn’t believe in.

Carnival by Rawi Hage has made it to my my list of Car Books. A list of novels where a car plays an important elements in the plot.