It would make perfect sense to be pessimistic at this point. I am hearing the dark whispers all around me: “The demonstrations in Egypt will not make an ounce of difference; one week from now everything will go back to where it was before”. “Egypt will end up like another Iran, replacing a dictator with a religious theocracy.” “There will be chaos, crime and looting.” “One dictator will be replaced with another dictator that is just as bad”. Well! all those sentiments are perhaps right and perhaps two weeks from now, two months from now or two years from now it will be “I told you so” time, but I don’t care. I feel wildly optimistic about the revolution taking place in the streets of Egypt since January 25th. At minimum it will shake things up and make dictators and their sponsors worldwide take notice. At best we might be witnessing a new dawn of popular a democratic change in Egypt and all of the Middle East.

I feel brilliantly inspired by the Egyptian people right now. Egyptians are the bravest nation on earth and my regard for Egypt and Egyptians, which has always been high, has increased by about 10 folds. To see people of all walks of life – young and old, men and women, secular and religious, Muslim and Christian, poor and privileged all marching side by side risking their life, defying an oppressive regime and their sponsor( the only remaining super power in the world) is awe inspiring. Everybody around the globe can learn a lesson or two on courage, determination and desire for freedom. Yes, yes, yes, I know this road is fraught with dangers and who knows where things will end up. But today and perhaps for only a brief few days there is hope of a new hope and a new country. I refuse to give it up and I will dwell inside this hope for as long as possible.

One of the amazing and unique things about the revolution taking place in Egypt is the fact that there are no leaders and no leading political party organizing it. It simply is a group of individuals, each one deciding for himself and herself how to act. As for how to best proceed forward, the solution is best summarized by a placard of one of the Egyptian protesters. This photo was taken by Egyptian blogger Haisam Yehia aka Jarelkamar 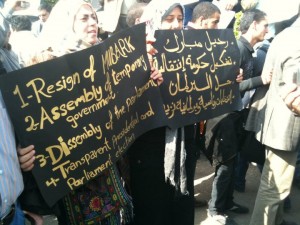 There will be a rally in Vancouver BC in support of Egyptian people on Saturday Feb 5th at the Vancouver Library Square between 1-3 pm. If you live in Vancouver , consider participating in this optimistic and historic day. 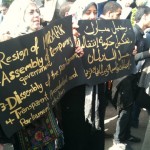 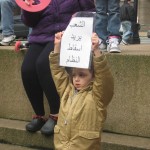 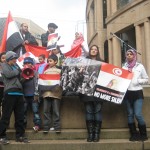 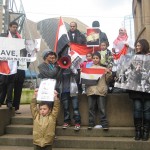 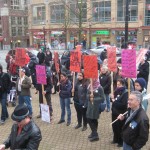 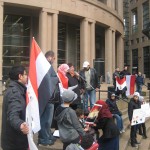 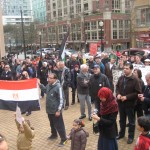 One thought on “Dare To Be Optimistic”