A story examining the relationship between pleasure and guilt. My every pleasure be a guilty pleasure?

Eight years ago when I started taking flamenco dance classes, had somebody told me that today  I would be in rehearsals for my first professional dance show I would have been seized with a king size laughing fit suitable for a Monty Python marathon viewing.  A middle aged, computer geek, mother of three does not illicit the image of a dancer in my imagination. Yet here I am. As I rehearse for my small role in a dance show, titled Café de Chinitas “Viñetas del Mozaico”, with the guidance of dance teacher and choreographer Kasandra Lea, I began to reflect on the unforeseen path that has led me to this point.

Flamenco is a mystery which has taken me down a winding road, at times it felt like a maze that I was supposed to solve, other times like a well crafted science that I needed to study. It has filled my life with joy, but also broke my heart.

After my first year of studying flamenco as a complete beginner I contemplated quitting. My father asked for the reasons. I told him that dance classes were expensive and I was thinking it was best to save the money towards a more useful goal. In hindsight I can see that I was feeling guilty about enjoying something. I will forever be grateful for what my father told me in response. He said : “You earn more than enough money, you clearly enjoy the dance classes. What is wrong with spending some money on yourself especially when you have no financial difficulties?”  Thereby giving me permission to spend money, and more importantly time, on myself for no practical reason other than the sheer pleasure of it. Freeing me of the guilt part from my guilty pleasure.

Ten years ago my daughter ,whom I nicknamed Brambourka, was struck by her first asthma attack. As I sat next to her bed in the ER room holding her hand, there it was- a heavy sinking feeling in my stomach, I have felt it before and unfortunately was all too familiar with it at this point- guilt. Today when I reflect on those days,  I realize that I had nothing to feel guilty about. I was by her side 24/7 each time she was hospitalized. I followed all medical instructions and never missed a medical appointment. I did everything in my power to support her both physically and emotionally through it all. Why was there this crushing self flagellation? Did I expect myself to develop super powers and be able to snap my fingers to make the illness go away? Did I think that I could battle asthma with my shear will power? Perhaps I believed that if I willed it hard enough the health problems would just go away and I wasn’t  willing it hard enough so somehow it was all my fault.  Brambourka eventually outgrew the asthma, with time her lungs got stronger and asthma attacks are thankfully a memory from the past.

Then there was the guilt from being a working mom.  Being a stay at home mom was not financially feasible for me. My choices were work or starve.  Even though I worked minimum hours required for my job and travelled for work only when absolutely unavoidable, the heavy sinking feeling in my stomach followed me around. As if I expected to clone myself, with one ihath working in an office – building business software and a second ihath that would stay home to make chicken stock from scratch. O! How I beat myself up whenever one of those ihaths was not performing with absolute brilliance and a big smile on her face.

To dance flamenco is to constantly eat humble pie … for me any way.  I wish I chose an easier guilty pleasure. I arrived to my dance classes feeling like I was on top of my game, I had a successful career, I thought I had figured out the whole mother gig thingy,  I was mighty confident. As a beginner I thought – no problem! I will work hard and figure this flamenco thing eventually like I do with everything else. Hey! I am smart, I am hard working, I am driven … how hard can it be?  Learning more only served to illuminate more brightly how much I sucked at it. For how can I watch Eva Yerbabuena perform her solea with such perfection and divine expression and continue to pretend that I can dance at all? I would tell myself that I shouldn’t compare apples to oranges. The likes of Eva probably start dancing when they are children and do it full time their whole entire life, whereas I only do it as a guilty pleasure hobby taking one , maximum two classes a week.  Logic aside, a perfectionist, strong ego forces that impossibly unfair comparison anyway.

Two years ago I started taking the Bulerias Por Fiesta  classes with Kasandra, I thought surely I knew at least a little about flamenco at that point and was expecting myself to do well. In the class each student is expected to dance solo and then receive feedback from the teacher. Kasandra’s first feedback to me was that I was out of compass (dancing out of rhythm) the cardinal sin of flamenco. I have been studying flamenco for 6 years at that point, and I am was out of compass, how lame is that? So being the strong minded stubborn me, I decided to practice every day at home to nail this bulerias challenge. The next week the feedback stated that now I was media compass, which means I was on the beat but starting in the wrong place. The week after, I  was staring the footwork on 12 instead of 1, A bad habit that I have developed. Then Kasandra told me I was dancing with too much energy all the way through, I needed to relax and put energy in the right spot and chill the rest of the time otherwise it all looks the same. That is when I decided to video tape myself dancing using my webcam at home to see which bits I can improve on. The video footage looked fine and I realized that I was doing  the “too much energy” only in class because of nerves, at home it seemed ok. So I decided to focus on relaxing while I dance and not be so intense. This guilty pleasure seems impossible. No? The next week I was told that structurally my dance was all wrong and I need to completely change my routine. I was taking too long to do anything interesting. I guess I was too relaxed at this point and doing it with no energy at all. Now I was facing a dilemma : relaxing but staying intense at the same time. There is no way to go through this experience and not feel humbled,  I was trying hard, very hard. Practicing at home every day, even on weekends, placing all my creative energies on attempting to find just the right balance to dance a credible 90 second bulerias.

This summer, my son Yusuf faced a health issue. I will not go into the details, except to say that I spent difficult two years mostly at the BC Children Hospital. Everything turned out fine in the end and he is in full health today. In between appointments with doctors and medical test, I experience a whole spectrum of feelings: shock, grief, worry  and sadness. To my great surprise the sinking feeling in my stomach was missing. Mr. Guilt never arrived to visit me during those days. My ego has been cracked. I experienced a strange sense of submitting to the reality of it. 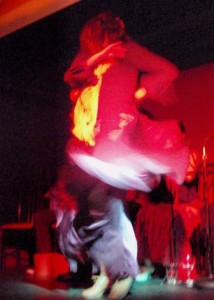 I don’t expect myself to snap my fingers and make illnesses disappear. I don’t have the power to clone myself. I suck as a dancer.  The older more mature ihath is ok with that. Perhaps I leave much to be desired in all the roles I play in life: mother, daughter, friend, employee. What I do know is that every day I wake up and do my absolute best in everything that I do given what I have. As I go about my busy schedule taking care of members of my family whom I absolutely love, I make sure to leave tiny space for one important person in that family – myself. I dance for the sheer joy of it. I shall release the guilt part from this guilty pleasure. If I become good at it one day, then that will be the cherry on the top.

2 thoughts on “A Guilty Pleasure”