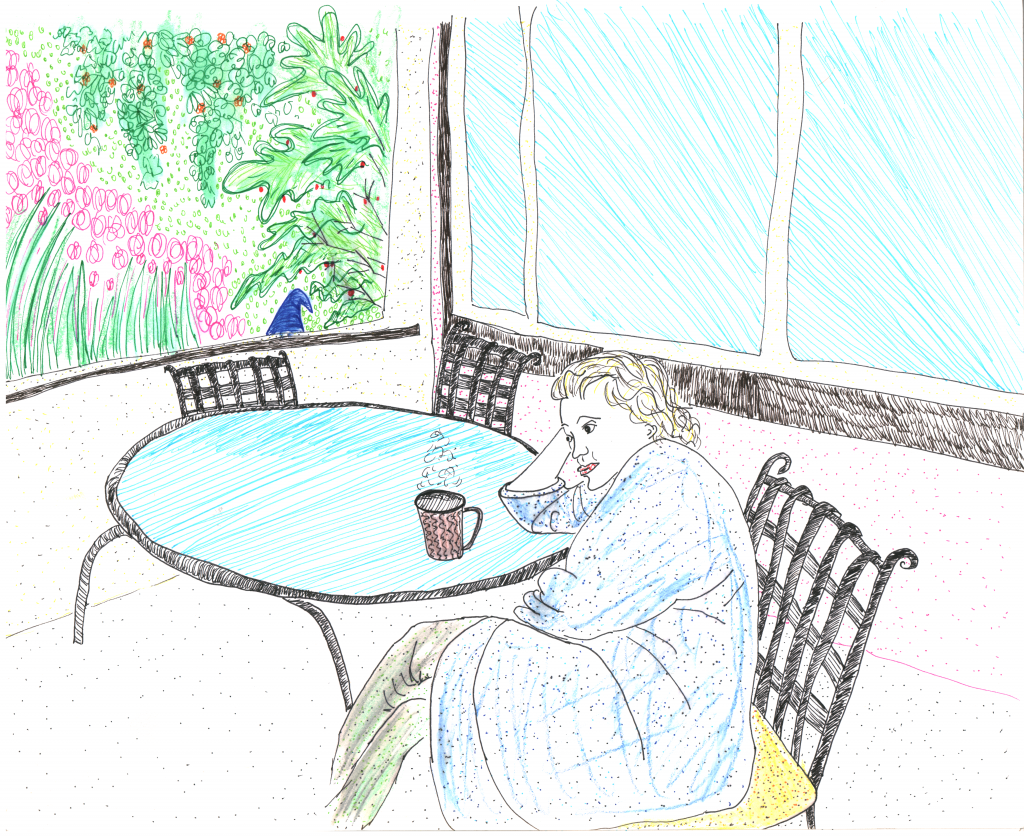 One beautiful sunny day, Frakash was weeding and planting pink tulips in a garden that always needed oodles of work. It was the garden that Laila liked to call Laila’s garden, and Frakash called it the Heaps of Labor garden. Laila was the woman that lived in the house right next to the Heaps of Labor garden and Frakash would observe her when she sat on the sundeck, drinking a cup of coffee or working on her laptop. Laila was an interesting person to Frakash. She was a quiet sort that rarely said anything but when she did, it was sharp as an axe. Laila was nothing like Frakash’s gnome friends, she always used few well chosen words to express big ideas. She worked as a computer programmer in a software development company and would say words that Frakash didn’t understand; like server, upload and database, but the unknown words only made her seem more intriguing. Laila would sit on the sundeck for hours focused on her laptop, tapping on the keyboard with piercing attention. Every once in a while, her breathing would slow down, her body would stop moving completely and a fierce look would appear in her eyes. In those moments, Frakash wished he had a magical crystal to show him the thoughts forming inside Laila’s head. He was certain that intricately majestic worlds was forming and dissolving inside her head, right in front him, yet he was deprived of chance to see them. Laila’s children would poke Frakash in the eyes sometimes and her husband would try to foolishly compete with his gardening work, but Frakash enjoyed working in the Heaps of Labor garden because every once in a while he would hear something that tickled his imagination.


One day, Frakash finished his work and decided that it was a good time for a sighing break. He sat underneath a shrub that seemed suitable for the pursuit and just when he was about to exhale, he overheard Laila talking with her husband. She was bragging about her latest victory at work: “Yesterday, I presented my new design ideas to the team; the boss loved it and said that my design was the most brilliant design he had heard in months. Everybody else agreed. Even Mr. Grumpy Bumpy had to agree that my idea was the best. I am the queen of the geeks.” Laila said to her husband with careful excitement. Frakash’s ears perked up as he heard a trace of sadness come next in Laila’s voice. “I love my work, but I feel a dark menace lurking underneath the surface.” Laila paused hesitating and then looked straight into her husband’s eyes and said, “Somebody among my co-workers …. Darling! Are you listening?…. is trying to sabotage me with doughnuts. It is as if an evil spell has been cast upon me. You know how hard I have been trying to lose weight in the last four months. Everybody knows that it is my number one goal of this year. Every few days, somebody brings free doughnuts to the office. I try to ignore them, but it is as if I am possessed by the sugar seduction fiend, I can’t resist.” Frakash overheard Laila complaining.“I can hear the greasy calorie bombs saying with an alluring voice: Come grab a doughnut and stuff it in your mouth. ” she continued.

Unable to sleep, Frakash spent the whole night thinking about what he overheard in the garden. “Wow! Laila uses logic to solve problems at her work”, Frakash thought to himself. “Instead of memorizing the same tired old list of magic spells that has been passed down the generations for thousands of years, Laila gets to come up with something new, something that she created all by herself, something creative”, Frakash nearly stopped breathing in awe of Laila’s work. He was tantalized by thoughts of presenting genius ideas to a group of geekmeisters and impressing even the smartest among them. He fantasized about a meeting where he presented impressive ideas and then as a reward the geekmeisters would bring him mouth watering doughnuts to feast on. He could imagine others looking at him with adoration admiring every word he uttered. O even Laila is looking at him in admiration for breaking the evil spell cast upon her using his magical skills. An irresistible urge to visit Laila’s place of work overcame Frakash. He tried to convince himself that an adventure would not suit his temperament and that routine and sameness was the foundation rock of his being. Yet all night he dreamt about eating doughnuts and roaming around between all those geekmeisters that call themselves computer programmers. The next day he tried to push those ideas out of his head, but a flood of yearning has been unleashed and Frakash was possessed by a single passion and that is to join the office of the geekmeisters. It became his goal, his calling, and his reason for existence.

One thought on “The Adventures of Frakash …. Page 2”