I have been studying flamenco for 7 years now. The more I learn the more I realize that I have that much more to learn yet. Flamenco is a never ending adventure in frustrations. Only the very stubborn stick with it.

This year I had taken the bulerias class. “Muy dificil” I frequently heard instructors say in Spain when referring to bulerias. It means “very difficult”. Bulerias is a one of the rhythms in flamenco that is both serious yet light at the same time. Bulerias comes from the word to mock, tease or make fun of in Spanish. The whole aesthetic is that of teasing the audience. You pretend that you are falling but then get up, you pretend that you are going in one direction but then go in the other direction, you pretend you are having a fight with somebody and you are telling them off … etc. It requires a big personality on stage, not just technical ability. In Spain it is not uncommon to see dancers make vulgar gestures while dancing bulerias, the kind of gestures that your mother would ground you and send you to your room if she saw you making. In Spain the audience loves it, extra Ole’s are given. Here in Vancouver, I suspect that the audience wouldn’t get it.

In my bulerias class this year, each student is supposed to listen to the guitar, listen to the singer and then improvise on the spot in reaction to the music. The teachers watches and gives each student feedback on what was done right and what was done wrong. Flamenco is supposed improvisational and this class tries to teach each student to do just that. Week after week, I went to class and when it was my turn to dance, I couldn’t do it. The pressure of listening to guitar, singer and think about which dance move to do, was just too much for me all at one. After many humiliating experiences, I doubted if I will ever get this thing called flamenco and considered seriously quitting. Finally I was able to dance, but now came the feedback of the things I was doing wrong:

Out of compass (dancing out of rythem) the cardinal sin of flamenco. I have been studying flamenco for 7 years, and I am out of compass, how lame is that?

3 hours of practice every day followed, next week

I was media compass, which means I was on the beat but starting in the wrong place

3 or 4 hours of practice every day followed, next week

I was staring the footwork on 12 instead of 1, A bad habit that I have developed.

2 hours of practice every day, next week

I am dancing with too much energy all the way through, I need to relax and put energy in right spot and chill the rest of the time otherwise it all looks the same.

I video tape myself dancing using my webcam at home to see which bits I can improve on. I think I do the too much energy only in class because of nerves, at home it seems ok. I decide to focus on relaxing while I dance and not be so intense. Now it is time to think about what to perform for our student recital. I come up with some material that I practice over and over again. I keep it simple so that I can do it well. Next Week.

In class I start dancing, the teacher stops me 30 seconds into my routine and tells me that it is all wrong. Structurally it is all wrong and I need to completely change my routine. I am taking too long to do anything interesting. I guess I am too relaxed at this point and doing it with no energy at all.

At home I come up with a different routine this time, I try to think about relaxing but staying intense at the same time. I feel confused at this point … relax but not too much. I keep videotaping myself. Next week.

My routine is structurally sound, it seems ok. The teacher doesn’t like the ending though. Still out of compass at the ending …. ah! how lame is that! How can I be out of compass. For the next three weeks I practice bulerias almost every day.

Finally I performed my 90 second bit at the student recital, here is a picture from the performance. 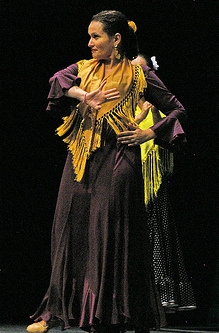 Will I ever get this thing called flamenco?