Are you asking yourself “Should I get a dog?” Wait until you read the story of how my family struggled with that question across generations and continents.

Since we were growing up in an undemocratic country my father decided that he would teach us about democracy by instating it in our family. “We are a democratic family”, my father declared with pride one day. Every Thursday evening, the family central council would meet to discuss issues set in the agenda. Each member of the council could speak up about his/her opinion on a given matter and after each person made his or her arguments, the council would vote. That is how we decided on family vacations, which restaurant to have lunch at on the weekend and family purchases. Over time a clear balance of power emerged. There was the party of the kids and the party of the parents. It seemed that my brother and I always voted the same way and my mother and father voted together. This young democratic experiment was a happy one …… well only for a little while. Historically, transition to democracy is frequently associated with political and social upheaval and the transition from monarchy and feudalism to giving power to the common person is fraught with difficulty. Our family was not above the tragedy of the human history.

Along came a T.V. show from far away land, from a far away country called Lassie. A show about an exceptionally beautiful dog that frequently outsmarted humans. Despite her many superior qualities, Lassie always returned to her owner and served him in a most loyal fashion. In those childish innocent days, us kids blurred reality with what we saw on T.V. And allowed our naïve imaginations to be invaded by influences from sinister sources. Enchanted by magical fantasies presented succinctly on that tube we went about our days dreaming of one day owning such a dog. A dog that saves you from bad people, can empathize with your feelings and even make your deepest desires come true. Then one day, as if by magic, I saw Lassie. No! not the T.V. show. But a real dog. “Should I get a dog?” The child me asked. My answer way yes, yes, yes.

On the beach shore in Kuwait, we met a young man that owned a dog that looked like Lassie. My heart pounded with delight, my brother and I were exceptionally happy when the young man allowed us to pet his dog which we saw as being magical. Then the young man told my mother, that his dog had given birth to several puppies and he would be happy to give us one of them if we wished. O the thought of owning a dog like Lassie, it seemed like the best thing that could happen in the world. “Should I get a dog?” A concrete answer was within reach. With delight we went home to get father’s approval to get a dog into our house. When we suggested the idea, my father objected strongly, sighting the fact that we live in an apartment and that a dog needs large spaces to run around in and so we weren’t allowed a dog. He also added that he hated dogs and couldn’t stand the sight of one, nevertheless have one living with him and so the idea was completely out of the question. “Should I get a dog ?” My father’s answer was no no no. On Thursday the family council met as usual and I tabled a motion to allow a dog into our humble abode. The kids party voted yes, but the unexpected happened and a vital member parents party defected from her usual alliance with the party of the parents and chose just this once to vote with the party of the kids. Much to my father’s astonishment, my mother voted yes to getting the dog. “Should I get a dog?” My mother said maybe. My father relied sternly that no dog would be allowed into our apartment and that it was either him or the dog in the house … end of discussion. “But Dad! … what about democracy, we voted and the yes vote won, you are not allowed to say no in the face of democracy”. “As the bread winner of this house hold, I retain the veto right, I am applying the veto right on this matter” was his answer. We objected, we held rallies in the living room of our place protesting the veto right. We made up placards with slogans and hanged them in our rooms “Down with the Veto right!”, “Say no to father’s dictatorship!” we plastered all over the house. When all civil disobedience methods failed to move my father from his position we resorted to more childish methods. We cried, we pleaded, we had tantrums, we held hunger strikes which only lasted a single evening and we promised we would be really really good and well behaved for the rest of our lives if we were allowed to own the dog. None of the methods, both mature and childish, were met with any success. The dictator was adamant in his position that no dogs were allowed in the house and that was that.

From then on, we called my father’s democracy the one-legged democracy. A democracy where the little people got to decide on matters of little consequence but got ignored on the really important issues.

I myself don’t create illusions of being a democracy within the bound of my own family. For one, there are three kids in my family and therefore the party of kids would always be stronger than the party of the parents. Besides, I live in a democratic country and therefore feel no obligation to instate foolish notions in my house hold since my kids will learn about democracy from school and by growing up in Canada. When the dog issue came up a few years ago, the answer was No, no fuss no muss. Then the year ago the kids wanted a cat, again the answer was a simple no. My kids begged and pleaded, telling us the all other kids had a pet in the house, but my simple criteria was that I spent eight years of my life changing diapers and now that all three kids were out of diapers, I had absolutely no desire to clean poop. Each time I go for a walk and see somebody scooping poop after his dog, I think to myself “Thank God I don’t have to do that, how disgusting”. There is no power on earth that will make me scoop some animal’s excrement several times a day. When I changed diapers at least I felt love and dedication towards my own child, but with some animal, no thank you I don’t need the headache. My kids tried to convince me that they would do all the work, but I told them that I know that they would do the work for the first two weeks and lose interest afterwards and it will be me left holding the feces. Then finally , two months ago, the kids came home one day demanding that we get hamsters. Again I gave them the standard “I changed diapers for eight years and don’t want to deal with stool any more”. The kids begged and pleaded but I was stead fast in my refusal sighting the waste material veto right. When my eldest daughter told me that my refusal was undemocratic, I reminded her that we are not a democratic family. We are not even a pretend democratic family like the one I grew up in. We are a “The one that cleans the poop gets to decide” kind of family. Should I get a dog? My answer is no no no. Many philosophical lively discussions followed. Then, the unexpected happened. A defection. A member of the parent dictatorship sympathized with the poor oppressed kid masses. My husband, told me that the kids have been wanting a pet for years and we have always said no. That it is unfair that all other kids have a pet, but not own kids and that perhaps we should consider getting hamsters. Besides hamsters are easier to take care of because they stay in a cage. Now I was in a difficult position. It was me against all three kids and my husband. I was the evil parent person. Everybody was giving the look that says the whole world would be great if you would just change your mind. Argh! What could I do.

I guess I am the one-legged dictator. Should I get a dog ? I think the answer has finally been made. 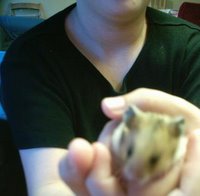 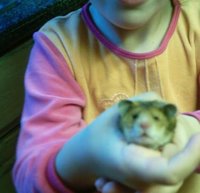 My son decided to go back to his favorite action figure after one of the hamsters peed in his hand. He is the smart one on the family.

What about you? Do you have a “should I buy a dog story ?” Leave me a comment below.

Sometimes people email me their own stories. Here is a touching story from Pam which I share here with her permission.

While I was growing up we got dogs, but they were outside dogs. I remember two of them. The first one was Brownie and he was a collie mix then when he passed we got Sam who was a beagle mix. They had good lives on our 4 acre wooded property in the real country of Missouri. We had a basement we brought them into if it got too cold outside.

As an adult I have owned many indoor dogs through the years. They have
brought such happiness in our lives. We are almost 60 yrs old now my
husband and I and we lost our last dog this year. I think it hurt more
because our Chihuahua Peanut died end of last year and Cinamon our white mixed terrier died just early this year. So it’s with a heavy heart that we are not getting another one.

I’ve attached pics. The first is about 8 yrs ago and that me with Cinamon &
Peanut at Christmas time. The other is about 17 yrs ago and that’s me with
Dutchess my hubby’s precious girl Dauschun and Buzzman my male hyper rat terrier. Also we have always bought all of our animals from the animal
shelters.So when we decided not to get anymore dogs. I washed everything
and packed it up and donated all the food, dog beds, bowls and more to The
animal shelter here.