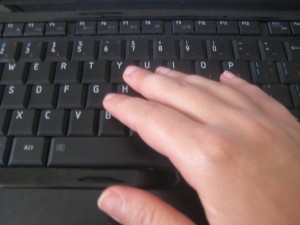 You see them everywhere. Sitting at their desks, staring at the monitor, murmuring incomprehensible words to themselves. I am talking about computer users. Walk around the office and ask your coworker “what are you doing?”. The answer will frequently be “Writing a document, sending an email or gulp! Installing software”. But what are you really doing, what are you trying to achieve, communicating with a customer?, planning for the future?, learning something new? or solving a problem?”. It seems that computer use has become a purpose on its own.

Busy, busy, busy, I am checking my email, but what have I accomplished?

How many times have you heard somebody swear while using his or her computer? “Damn this software!” a person might say in exasperation. As a software developer involved in software deployment; I had to experience the disappointment associated with showing the user, software that took many late nights to construct, only to be faced with yawns or worst, frustration. What started as a cool idea or a cutting edge technological breakthrough turns to a nightmare when installed on a customer’s computer. People don’t care about technology; they simply want tools that help them get their job done. For about 12 years I have been developing various business applications. Sometimes in a quiet moment when I close my eyes, I can hear a frustrated person swearing at me.

Recently, I watched my friends, a couple in their 60’s, buy a new computer. These are very intelligent people with many degrees and professional accomplishments between the two of them. I watched in horror as they tried to navigate through the maze of technical mambo jumbo and figure out what goes where. This is a couple who wants to write emails, edit documents and browse the internet a bit. Sounds fairly simple. I got many late night phone calls that started like this:

“I don’t know where my email went.”

“A dialog keeps coming up that says are you sure you want to download a plugin, should I click on yes or no?”

“I saved my document and now I can’t find it.”

“The anti virus is removing my attachments, but I need to read those.”

I went over to their place explained technical jargon and told them which dialogs to simply ignore and which ones they should take seriously. In the back of my mind I kept thinking, “My god! this must be overwhelming”. The worst part was the look of confusion in their faces. There was a sense of defeat, like this is too complex and we can’t figure it out. I felt a bit of guilt for having participated in developing this jungle of software mess. This monster that makes intelligent people feel stupid. After about two months of dedicated effort on my friends’ part, they are cruising on their computer taking full advantage of its many features, but after what turmoil.

The problem with computers today is that there is too much technology involved in its usage. To perform the simplest tasks on a computer you need to understand terms like HTML, HTTP, PDF, format, upload, server, database and many others. Imagine if Steven Spielberg had to know the internal workings of a Camera before he was able to make a movie. Imagine if he had to sit around while a technician was fixing the camera, or even worse, if Mr. Spielberg had to open up the Camera and fix the electrical parts himself. We wouldn’t have masterpieces like E.T. or The Color Purple. You don’t need to be an electrician to use a camera; you simply click on a button and start shooting. Getting too involved in the technical details bogs down the creative process. What masterpieces are we missing out on, in the digital world?

I think we software developers should dedicate ourselves to freeing people from software, so that they can focus on their work. We need to build a set of technologies that adapts software to people, rather than expecting people to adapt to software. We should create the camera effect for software. Software that does what its supposed to do while blending into the background without making too many in your face demands.

One day you will walk into somebody’s office and see a person, rather than a big monitor.

Ok, I have a confession to make. I hate technology. I suffer from technology phobia. How I ended up being a computer programmer is a mystery to me. The computer geek that hates technology. I am a luddite in disguise. But, then everything in my life is psychotic so why not my career.

I still remember the first computer I got when I was 13 years old. It was apple

IIe. I could use assembly to program it or a software designed to teach kids to program called logo. I was hooked. What started as a hobby ended as a career.

I remember my first job straight out of university. I thought I was in heaven. I got a desk, a computer, manuals, I could play on the computer all day long and the best part was that I got paid for it. WOW! that is so cool. To do the thing that I would have loved to do for free and get money for it. Plus, now I was writing software that other people were using. That is 10 times cooler than those university projects where you wrote some software to be marked by a professor and thrown away. The joy of creating a complex virtual world and then creating it from scratch. Programming to me is like playing with lego blocks. You imagine something in your head and then see it come to life and finally you get the satisfaction of seeing other people use it.

People ask me how I can sit in front of a computer for hours. “Isn’t that boring?”, they ask. If only they could see the vivid, multi colored world in my head while I am doing that. They would realize that my job is only as boring as my imagination is.

And then the internet came along. There was so much anticipation so much potential. This was the technology that would transform human kind. Most of it has been a huge disappointment to me. I read somewhere that 70% of all internet use is related to pornography. We have a medium that allows people in India to communicate with people in Portugal in real time. We have a medium that allows people to express themselves and exchange ideas, yet most people choose to use it for fake sex. I can’t believe that people are giving up on experiencing the real thing. The human race is doomed. I can’t believe the people that spend hours and hours surfing the net, most of what is on the net is garbage, what is there to surf about? What a colossal waste of time. Now we have cyber friends, emoticons for fake emotions, we send emails instead of having a straight discussion with a person. I have helped to create a monster.

Get rid of the cell phone. Don’t send an email. Go have a chat with somebody, not in a chat room, but rather by meeting them face to face. Look them in the eyes as you speak, notice how they smile. No software will give you that.