“An Iraqi and a Palestinian moved to live in Israel”, starts the joke. Except that in 1996 when I moved to live in Jerusalem I didn’t know the punch line, not yet anyway. Let me explain, I am a Iraqi citizen married to a Palestinian. My husband is a member of a minority of Palestinians that possess an Israeli citizenship. He was offered a job to teach at the Hebrew University as part of a new affirmative action initiative at Israeli Universities to prove that they are not racist. I had great doubts about the move. With all the conflict in the region how can an Iraqi and a Palestinian live in Israel? It sounds like some sort of joke. My husband with his usual calm manner assured me “It will be a bit of an adjustment but it is going to be fine, I promise!”

So we packed our things and decided to try it out. We were young and carefree. “Why not? it will be an adventure “, I told myself. I managed to get a job within weeks of arriving in Jerusalem. I was to manage eight people at a software development company. Three of whom were immigrants from Russia with no Knowledge of English and the rest spoke it very poorly. Imagine explaining job assignments in hand waves and head nodes. The whiplash created strong motivation for learning Hebrew. I immediately, started intensive Hebrew classes. When asked about my country of origin I simply answered I was from Canada, I avoided mentioning the part about my Iraqi origins. Everybody bought it, thinking that my accent is just a funny Canadian accent. I didn’t bother to correct them. With Saddam Hussein threatening to use chemical weapons on Israel, What if somebody decides that shooting the Iraqi in his own back yard is easier than shooting the Iraqis far away. Many of my co-workers came to work wearing guns, adding to my feeling of nervousness. Several of the people I managed had recently been released from the army. One was a tank commander; the other was an explosives expert. It was easier pretending being a Canadian with a funny accent.

Within a year I was able to pickup the language and speak it comfortably. I had to remember to speak the right language at the right time. At work in Hebrew, with North American’s in English, in the west bank Arabic only. One day I was chasing after my daughter trying to get her dressed. The phone rang. I picked it up in a hurray. Should I start by saying Hello, Shalom or Marhaba? which language to use when I haven’t identified the person yet? In my confusion I yelled “Aaaah!” into the phone. My friend on the other end asked “Elen are you feeling ok?”. I was feeling ok, just a little uncomfortable in my own skin.

One day, during lunch hour at work, my co-worker declared that all Palestinian children should be killed. While munching on a chicken breast, he added: “They will all grow up to be terrorists anyway. We might as well kill them now and save ourselves lots of trouble later”. Did that proclamation include my daughter? I wondered. She was only 3 years old at the time. My co-worker Uzi was a friendly intelligent person, he simply wants to kill my daughter, and otherwise he was a very nice guy. The expression “The personal is political” gained a whole new meaning. I suppose life threw me a few lemons. Uzi and me got along just fine at work; I never discussed politics with him.

The sour taste lingered for a while. “The Iraqis are not regular people like us”, yet another co-worker told me on a different occasion. She saw on T.V. Iraqi people marching in Baghdad in support of Saddam Hussein. I mentioned that maybe these people were marching in the street out of fear of a dictator. “They are born with a violent mentality, you don’t know these people, they are not like us”, she tells me. How I wanted to let out a loud laugh, like those evil laughs that Jack Nicholson’s characters are capable of. It was so tempting to say: have you ever danced with a ghost in the pale moonlight, Boo! Instead I smile with hidden mischief. I thought I was so smart having fooled them all. Realized only later that the joke was on me.

I am a big fan of Jack Nicholson. I love his evil laughs and menacing looks. My favorite was the role he played in the first Batman movie as the Joker. As a result of a plunge into toxic waste chemicals, the joker’s hair turns sickly green and his face becomes ghostly white. Most freighting of all is the big smile frozen on his face. Smiles and bad jokes abound throughout the movie. The Joker laughs while killing others, he laughs while being killed. Everything is a punch line for him. The Joker has no choice but to laugh. I laugh lots and loud, some people call me the giggler. They can’t see the toxic waste I’ve been through. After seeing Jack Nicholson’s movie, “About Schmidt”, I go to Calahon’s, a coffee shop frequented by university students. In the ladies washroom somebody had scribbled on the wall: “Your life is a joke without a punch line”. The giggler disagrees.

“An Iraqi and a Palestinian moved to live in Israel. One day as they are taking a walk in downtown Jerusalem, the hot sunny weather takes effect. The Iraqi man faints and falls to the ground. The Palestinian man starts shouting help! help!. An Israeli man runs over “what is wrong?” he asks. The Palestinian man says “I am not sure if this Iraqi man is dead or alive”. The Israeli man says “No need for alarm, I will take care of the problem”. He takes out his gun and shoots the Iraqi man in the head twice. “Now we know he is dead for sure”.

My life is a joke with a fantastic punch line. The funniest punch line there is. Don’t you agree? 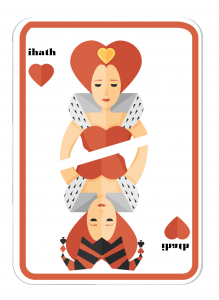